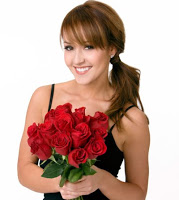 Oh man, has it really been two weeks since a new episode of The Bachelorette? How did we all survive a Monday without Ashley and her skanky outfits and bowlegged walk?

Unfortunately, Monday night’s episode was a bit of a snooze, and it featured an even more coma-inducing interview with last season’s “winner” Emily Maynard. But first, Ashley and the guys headed to Taiwan, where she went on a whirlwind four dates and sent two guys packing – so let’s get to it! 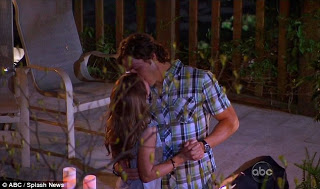 The first solo date went to Constantine, who is that guy that looks a lot like Ben but doesn’t have as strong a connection with Ashley. Their date was a total snooze fest. They took a train ride to a small village, wrote wishes on a lantern and sent it off into the universe like in Tangled, only with less romance than the children’s animated film. Ashley wore a shirt with cut off sleeves and a cut-out back – it looked like she’d made it for a pub crawl. They spent a lot of time talking about how happy they are. Ashley told Constantine that “Physically, you are exactly what I’m attracted to,” and I said “Ha! No surprise there, considering there are TWO of him still kicking around.” Honestly, the best part of Ashley and Constantine’s date came after the credits, when we found out that a dog had actually peed on their love lantern.

Ashley didn’t have any roses to give out during the one-on-one dates this week, but after the time she spent with Constantine I thought he might be in jeopardy. I just don’t sense a spark with these guys at all, and Constantine seems too grounded for this show – I mean, he actually wants to see how she’d fit into his life and get feedback from his family before he falls in love with her! Who does that? 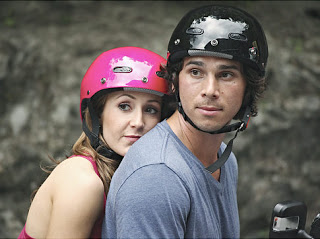 Next up, we had…wait, what? Constantine gets a second date in a row? Oh, no, never mind. It’s just Constantine’s doppelganger, Ben. Ashley definitely has more chemistry with Ben than with Constantine, but their date was still pretty boring – do these people know how to discuss anything other than their own emotions? If I could never talk about how I’m feeling, that would be great. But with these people it’s all “Aren’t we having fun?” and “I feel really good about this” and “I haven’t been this happy in a long time.” And just when was the last time you were this happy, Ben? You seem to be implying that in the past, there was someone who made you even happier than Ashley’s making you right now. And that just ain’t gotta fly. It’s time to start saying “I’ve never been this happy before, ever!”

Ben didn’t come home from his date until the next morning, which didn’t sit well with the other guys in the hotel room – especially JP. Is it just me, or did JP seem a little more unhinged than usual this week? What’s his deal, has he run out of drugs or something? He was all twitchy. Ben said that he and Ashley stayed in separate rooms, but I think that’s a likely story.

Three Guys and a Wedding 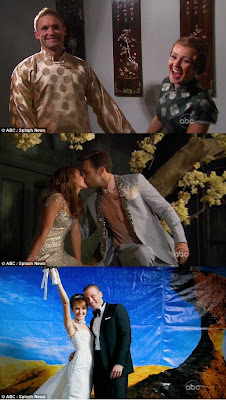 JP’s mood didn’t improve since that day he had to go on a group date along with Ames, Lucas and, of course, Ashley. And to top it all off, they were treated to the second stupidest date of the season! What’s with all the painful wedding themed dates? I mean, nothing’s worse than the pretend Vegas wedding that William was subjected to, but this was close. The three guys had to dress up in wedding garb and pose with Ashley for ridiculous wedding photos, which are apparently quite popular in Taiwan. I shudder to think about the number of people who have posed in front of those wrinkled backdrops thinking they look cool.

Lucas was mad because his costume was a dress, but I bet he was really mad because it mad him look fat. If only he’d not worn his normal clothes under it, I think he could have looked slimmer. Ames was subjected to a crazy, outlandish suit with a sheer pink shirt and sparkles, and JP got a “traditional tux”. If a traditional tux comes with a giant bow-tie. If not, then it was a clown suit.

Afterwards they all gathered for a cocktail party where everyone moped and no one touched any of the food. Do the people on these shows ever eat? Ashley spent some alone time with each of the three guys since she had a date rose to give out – and it was an important one, since hometown dates are next week. Lucas used his time to moan about wearing a dress, JP moaned about feeling jealous and angry, and Ames wisely came prepared with photos from home. In fact, I would have given Ames the date rose just for channeling Andy Bernard of The Office, but Ashley had other ideas and gave JP the rose instead. Can you say “pity rose”? Pathetic. Considering jealous and insecure is how Ashley felt 99% of the time when she did The Bachelor, though, I guess she found the behavior more acceptable than I did.

Finally, it was the last solo date of the episode – and it was going to Ryan! You might not have been able to tell since he’s always excited, but Ryan Sunshine was over the moon about getting his first one-on-one date with Ashley. For their date, Ashley wore a skanky backless shirt that was particularly inappropriate  for both windy weather and public prayer sessions. Oh, that Ashley. She really likes her back, doesn’t she? 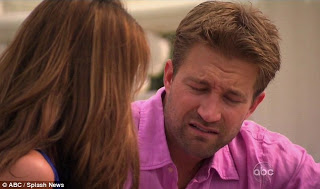 Since Ryan was easily the best looking guy left in the competition, I figured his odds of sticking around a little longer were pretty good. Wrong! Poor Ryan Sunshine never saw it coming. He grinned at Ashley and talked passionately about eco-friendly water heaters. (I can’t be the only person who was actually interested in the solution to wasteful water heater tanks, right? Right, people?) She frowned at him and told him a “funny” story about the time she threw a plastic bottle away and someone dumped her. He awkwardly tried to pretend like he’s never been that guy. And then she dropped the bomb on him. Ashley told Ryan that she wasn’t invested enough in their relationship to meet his family, and that she respected him too much to make him go through a rose ceremony so she was sending him home now instead. It was like watching someone kick a puppy. The guy was heartbroken. Seriously, I think he might have been experiencing sadness for the first time.

Ashley said she wasn’t 100% sure about her decision, and since Ryan seems like the kind of guy who doesn’t take no for an answer I’m going to guess that he’s the one returning in a couple of episodes. I’m sure if you look for spoilers you can find out if that’s true, but here at Couchtime we’re spoiler free!

Once again, Ashley decided to forgo the cocktail party and breeze right on through to the rose ceremony. Man, what does this girl have against cocktails? I wasn’t sure if Ashley would send Lucas or Constantine home, but when she called Constantine’s name first I knew the Texas boy was done. Constantine, Ben and Ames all got roses and Lucas was out the door with a swift “Good luck, sweetheart.” Bye! I won’t miss you! 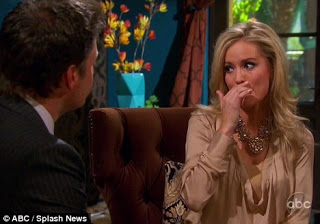 The last part of the show was taken up by Chris Harrison’s interview with Emily, but I won’t really touch on that. First of all, I wrote last week about how much Chris Harrison’s blog post on the interview, and the breakup of Brad and Emily, annoyed me. Chris Harrison continued to ruffle my feathers by saying things like “Some [of the people who’ve been on the show] have gotten married and even had kids.” Some? One! One girl met her husband and they have kids! The guy who chose another girl, then dumped her after the show and married the runner-up DOES NOT COUNT as the fairytale ending you’re selling. Neither do Ali and Roberto, until they actually tie the knot. So stop saying things like “Some of the couples who have gotten engaged on our show have not stayed together. They’ve parted, with broken hearts,” OK, Harrison? Almost all of them have broken up. Stop trying to pretend like the breakup interview is no longer the final step in the Bachelor(ette) lifespan.

Second of all, the interview was all kinds of boring. Unless someone throws a tape measure or a GPS in a fit of rage, or refuses to fly a sock dog across the country, I don’t care. Emily was very sweet and polite and gave up nothing, and so there’s not really anything to say. Which, if she’s to be believed, is exactly what Emily wants.

The Bachelorette: Taiwan On
https://haligonia.ca/the-bachelorette-taiwan-on-40262/