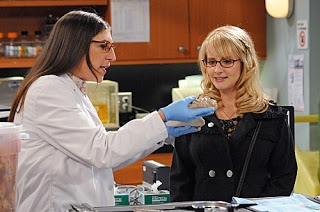 I have to say, I laughed out loud a lot during last night’s episode of The Big Bang Theory. (Which, thanks to a DVR malfunction, I had to watch online. If I can’t rely on my DVR, what can I rely on???)

The episode centered around Amy Farrah-Fowler and her hurt feelings after she found out that Bernadette and Penny had gone bridesmaids dress shopping without her. Mayim Bialik really took advantage of the spotlight and killed it with all her material, and I loved the way the storyline provided the opportunity to explore not only her friendship with Penny and Bernadette, but her relationship with Sheldon.

It’s easy to understand why Amy would feel hurt when she found out her gal pals went shopping without her. Any girl would feel stung by that, and Amy has a long history of not having friends. We’ve always known that she pretty much can’t believe her luck in being befriended by someone as cool as Penny, so she was devastated to think the whole friendship had been a charade.

Amy’s obsession with Penny, and specifically Penny’s looks, can sometimes come across like a little bit of a crush. But Amy is straight, and at the core of those affections is really just admiration. It was fun to see that come out as Amy expressed her intense hurt, and then as Penny and Bernadette tried to make it up to her and assure her that they really are friends. Amy is weird and occasionally overbearingly so, and as a viewer I could totally understand why Penny and Bernadette thought it might be easier to look at a few dresses without her. But they really do care about her, and that was clear in the lengths they went to to make sure the friendship stayed in tact.

With Amy in distress, Sheldon was called upon to offer comfort. This was not only hilarious, but also rather groundbreaking character development for Sheldon. Have we ever seen him go to such lengths to act as a real friend to any of the guys? Sheldon’s negotiations with Amy over how to make her feel better were hilarious. It went like this:

Amy: “Proposal: one wild night of torrid lovemaking that soothes my soul and inflames my loins.”
Sheldon: “Counterproposal: I will gently stroke your head, and repeat ‘Aw, who’s a good Amy?'”
Amy: “How about this? French kissing — seven minutes in heaven culminating in second base.”
Sheldon: “Neck massage. Then you get me that beverage.”
Amy: “We cuddle, final offer.”
Sheldon (pauses): “Very well.”

The resulting visual gag of Sheldon forcing himself to cuddle was hysterical.

Of course, Sheldon is still Sheldon and his resulting outrage at Howard and Leonard stemmed not from wanting to protect Amy’s feelings or anger over his friend getting hurt, but annoyance at his own evening being ruined because he had to spend it cuddling with her. It was the perfect way to make sure Sheldon didn’t fall too far out of character.

In the end, Bernadette and Penny made things right with Amy by offering her the role of Maid of Honor. It meant so much to her that it wouldn’t matter how intensely she handled those responsibilities. The end tag with Amy making a behind-the-scenes video of the three of them dress shopping was very funny. I can’t wait to see what will happen with the Bachelorette party.

I thought “The Isolation Permutation” was an A+ episode. Back when this show started, I thought it was a funny little show with a laugh track. A guilty pleasure, almost. But it’s developed into one of the best and most consistent comedies on TV. What did you guys think of the episode? Did you like seeing Amy Farrah-Fowler take a front and center role? The show was so hilarious I couldn’t get all my favorite jokes down, but here are a few: