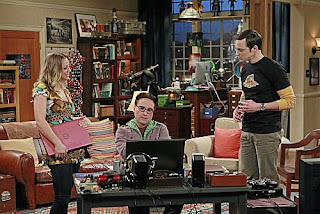 Maybe it was because I watched The Big Bang Theory on DVR after viewing three stellar Christmas episodes on NBC (Community, Parks and Recreation and The Office) but this episode really didn’t do it for me. In fact, at first I thought it was a rerun. OK, so Sheldon changing the wi-fi password so that it’s a dig at Penny’s mooching is a bit of a running joke, but even so not much about the episode felt fresh or unique to me.

The bullying storylines felt far too predictable. Everyone nerdy was bullied in school, Penny is pretty and she was a bully. Well, color me shocked.

It began when Leonard received an unexpected invitation to have a drink with his former bully. Sheldon recounted all the bullying stories Leonard had told him, while meanwhile Bernadette and Amy told Penny a few of theirs. Of course, Bernadette had the funniest one – her bully had stolen all her clothes from her locker leaving instead an elf costume…and the worst part was that it was too big. Penny said in Nebraska they just weren’t like that, and then told a hilarious story of tying an A+ student up and leaving her in a corn field all night. I just couldn’t believe that the Penny of today would really still see that as a funny story, and the whole plotline fell flat for me. 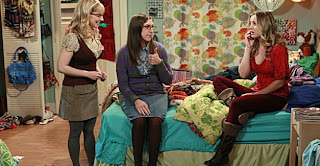 To make up for her past sins, Bernadette and Amy convinced Penny to do good instead – she couldn’t serve soup to poor people like Bernadette because it makes her hair frizzy and she didn’t want to build houses for poor people because she herself doesn’t have a house, so Penny ended up donating clothing to charity. Of course, it turned out that the charity bin was a goldmine for cute stuff, and the girls ended up taking more than they gave, even making a return visit a few days later. Penny felt guilty and put the stuff back, but Bernadette (who’d protested all along) still grabbed a cute pair of suede boots.

Meanwhile, Leonard’s old bully pretended not to really know about his past torturing tactics and Leonard went along with it – until Sheldon somewhat stood up for him. He showed up drunk at their apartment, kinda apologized and admitted that Leonard was a loser who’d become the winner while he himself had become the loser. Leonard was nice and gave him a place to crash, but the next morning the bully was back to stealing Leonard’s breakfast and calling him “Nancy”. I guess it was supposed to be funny that nothing had changed, but instead the whole storyline felt like a waste of time.

All in all, probably my least favorite episode from this season – but The Big Bang Theory has been really strong lately, and everyone is entitled to an off week. I don’t even have enough favorite quotes to make a list, but Bernadette shouting “It’s OK, I serve soup to poor people!” after taking the shoes did make me laugh out loud. What did you guys think?

The Big Bang Theory: Well, Bully for you!
https://haligonia.ca/the-big-bang-theory-well-bully-for-you-50481/