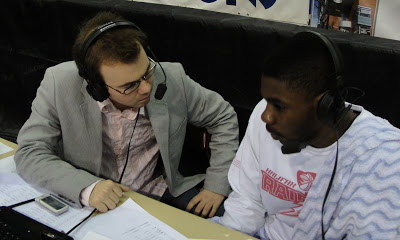 A back to back situation must be tough in the PBL, especially with an eight-man roster and without a head coach to lead the way. This was the case for the Buffalo Stampede who were without key players Mark Price and forward, Damone Brown in their back to back games in Canada. Buffalo pulled out the win against the Quebec Kebs on Saturday night but unfortunately had the tough task of travelling to Halifax the next day for another matchup.  And fatigue was a huge factor for Buffalo in yesterday’s game as the Stampede collapsed in the second half resulting in a Rainmen victory, 111-90.  The Rainmen were able to capitalize on the tired Buffalo roster with an 11-0 run early in the third quarter to build a 12-point lead.  From that point on, Halifax let their bench close the game out.

The 21-point margin of victory was impressive but it wasn’t exactly a pretty game for the Rainmen as they struggled to make shots early on.  The most glaring stat from the boxscore was how poorly Halifax shot from three point land.  Halifax was an atrocious 7 for 30 from beyond the arc as both Desmond Ferguson and Tony Bennett who are normally deadly shooters were cold from three.  It was the Rainmen defense that proved to be the difference maker as Halifax struggled on the other end.  Halifax held the tired Buffalo team to just 46% shooting with Buffalo committing 19 turnovers.

The Rainmen bench also came up big in this one with 52 points coming from the reserves.  Adris DeLeon was the lead spark off of the bench, leading the Rainmen in scoring with 17 points.  Eric Crookshank finished with the double double with 15 pts and 15 boards.  Rainmen newcomer and former member of the Buffalo Stampede, Cameron Stanley, made his Rainmen debut and finished with 11 points and 4 rebounds.

For the Stampede, Andy Robinson and Greg Gamble led they way with 29 points and 22 points respectively.  Gamble also finished with 11 rebounds.

“The win over the visiting Buffalo Stampede improved the Rainmen’s record to 7-2 on the season, securing the team’s hold on second place in the Premier Basketball League.”

“The Stampede kept it close till the third quarter when the fresh Halifax team pulled away. The Rainmen were led by Adris DeLeon who had 17 points and Tony Bennett who had 16. Eric Crookshank had a good game for the Rainmen with 15 points and 15 rebounds.”

The Rainmen will celebrate Valentine’s Day next week with a matchup against the Manchester Millrats at 4pm here in Halifax.

What did you guys think of the game?  What aspect of this Rainmen team has impressed you so far?  Where do you think the Rainmen can improve?  Let us know in the comment section below!