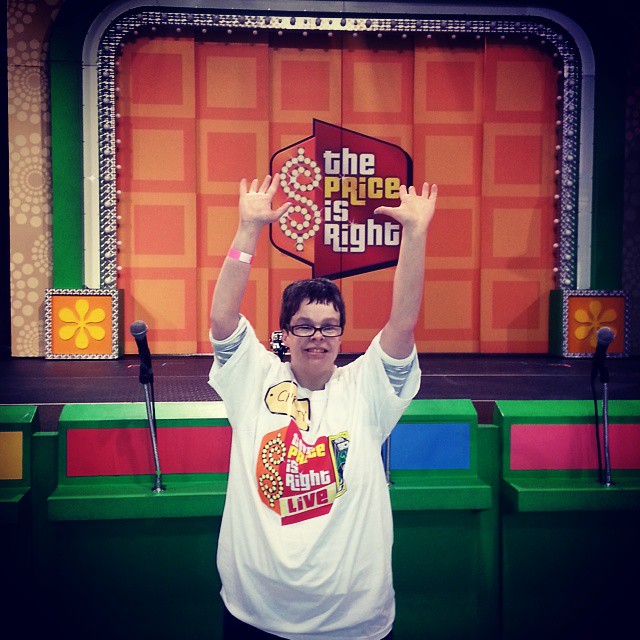 Christy Huskins has loved The Price is Right since she was a child.

She knows every single game, and every host – even the fact that Alan Thicke hosted the live show in Las Vegas. She was very sad when Bob Barker retired, and did not accept Drew Carey for at least two years.

Christy was born with Williams Syndrome, a genetic condition that causes various medical problems including developmental delays and learning disabilities. However, people with Williams Syndrome are also often highly verbal, highly social and show a remarkable affinity for music. Christy has all these gifts.

Christy is on a mission to go to Hollywood to see The Price is Right and meet Drew Carey. She saves any money she gets for this trip, and talks about it non-stop.

Although it might be a while until a trip to Hollywood is possible, Christy got to experience the Haliwood version of her dream on March 28th when the the interactive stage show version of The Price is Right came to the Dartmouth Sportsplex. By all accounts, it was an exciting experience for her.

Christy’s sister, Patty Huskins MacLeod, went above and beyond to secure tickets after they sold out in an unbelievable nine minutes. It’s a tale that involves kijijii, some potentially shady characters and a fare chunk of change, but Patty says it was all totally worth it.

“By the end of the day, Christy had no voice left and was totally exhausted from all the excitement,” Patty says. “She happily stood out in the cold rain for two hours. She danced, sang, laughed, clapped, yelled, screamed, hooted and shared her hopes and dreams of going to Hollywood to many strangers who became new friends. She spun the big wheel, just for fun.  It was a full, joyful day!”

The Price is Right: A day of joy for one “super-fan”
https://haligonia.ca/the-price-is-right-a-day-of-joy-for-one-super-fan-104475/