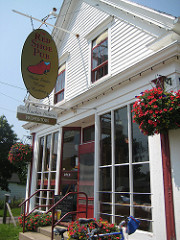 A month ago, my sister had her vacation and had every intention of going to The Red Shoe Pub but didn’t get there. I did the perfect “naa, naa” when I texted her to say that I was there (I know, I am a brat). It was the last day of our family vacation around Cape Breton and we had to put the brakes on while driving through Mabou, Inverness County. BTW, there should be a bumper sticker handed out at Cheticamp saying “I break for The Red Shoe Pub.”

Once inside, the place was busy, but then again, it was lunch time and we happened to nab the last four seats. This place is a mecca to The Rankin Family– their career and early family years. Mabou is where this musical family group were raised and is featured in their songs. One quickly realizes that this pub was designed for musical entertainment with a piano, 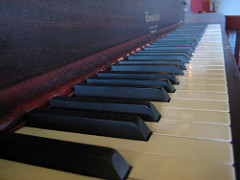 speakers and audio equipment along the middle wall of the establishment. Musical entertainment is every night of the week featuring local artists providing suppertime music and ceilidh’s.

While living in British Columbia, listening to The Rankin Family kept me connected to Nova Scotia. Their first self-titled CD (released in 1989) brought me happy memories of “back home”. I’m certain that a lot of east coasters living away can relate.

There is a large sign that reads “Beaton Building”, this original sign was part of the 150 year old building. After an extensive restoration, it was sold to Rankin sisters Raylene, Heather and Cookie and it’s been a popular spot ever since. At the back corner of the pub, I noticed an elderly local man wearing a green hat with a plastic grocery bag at his table. He sat alone. Suggesting to those who walked in the door as to where to sit. Nobody noticed him but I was fascinated watching his quiet gestures. It made me wonder who he was. An old family friend of the Rankin’s? A local who liked to people watch? I think people like him add flavour to a place such as this. 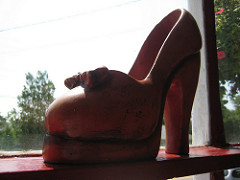 There is an interesting story on how the pub got it’s name “The Red Shoe”. An adventurous shoemaker Angus D. MacEachern of Glendale, Cape Breton had stained his handmade shoes a bright crimson with Sherwin-Williams paint. Johnny Gillis of North East Mabou, came up with the name ‘Red Shoe’ as a tribute to Cape Breton fiddler Dan R. MacDonald who had contributed a lot to Cape Breton’s music culture. Do you know why shoes were painted red?

Enough about that. We actually went there to eat! The food was fantastic. Loved the Nova Scotia inspired menu and beer and wine selection. Particularly how the menu suggested wine pairings. I only wish we were there during dinner time, when there is live music.

The Red Shoe Pub is a seasonal operation open from June 1st to mid-October.