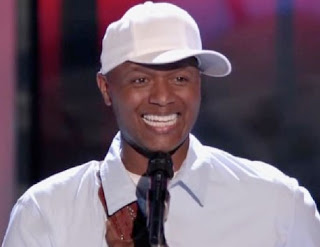 Javier Colon! Yes, the crooner who originally wooed all four judges and selected Adam Levine as his coach was crowned the first winner of The Voice on Wednesday night. While I was rooting for Vicci Martinez (but only if you put a gun to my head, and why would you do that?) I was perfectly happy to see Javier win. He has a beautiful, smooth, radio-friendly voice. He plays an instrument. He has an adorable family. He’s been around the block, musically, and has had some record deals fall through. He needed this. And he deserved it – I think he’s a great musician.

While I had my own personal preferences, all four finalists on The Voice were terrific singers, and that made for an entertaining and fast-paced hour long finale. Each contestant got to perform a duet with an established musician, and some performances made more sense than others.

Vicci Martinez sang “Drops of Jupiter” with the guy from Train, and I really enjoyed the performance. I refuse to be ashamed for loving this song, and I thought they sounded great together. I was less impressed with Pat Monahan’s hair. Why does he always look so dirty? How does one even achieve such a look? It’s like he stuck his finger in a light socket while spraying his head with extra-hold hairspray. Also, why is “Drops of Jupiter” such a sensitive song? And why does Cee Lo know that? Are they best friends? Did Cee Lo mention that just because he’s BFFs with Pat? It wouldn’t surprise me – if we’ve learned anything this season, it’s that Cee Lo Green is a name-dropper to rival one Randy “Dawg” Jackson.

Next, Javier Colon sang “Landslide” with Stevie Nicks. I didn’t expect Stevie to be paired up with Javier, but the result was a beautiful rendition of a song I thought I’d heard done too many times. Javier sounded fantastic and Stevie sounded…well, voices deteriorate with age. It’s OK. She was fine. The diet reminded me that when Javier isn’t over-singing he is really damn good.

In the weirdest pairing of the evening, Beverly McClellan sang “Good Life” with the guy from One Republic. Sorry, but Ryan Tedder and Beverly just do not mix. And her on-stage persona makes me kind of uncomfortable. That dancing was just awkward. I would have preferred an encore of her duet with Christina.

Finally, Dia Frampton sang “The House That Built Me” with Miranda Lambert. I know what you were thinking – “Miranda Lambert?! How did they score her?” Well, she’s married to Blake. In case you missed one of the 40 magazines they were on. Or you never heard Blake mention it. Anyway, the duet was fine. I just wish Miranda Lambert would stop dressing like she’s a stick thin teenager. She’d be so much prettier in a less skanky dress.

After each duets, the coaches had a chance to tear up and sing the praises of his/her contestant. Really, are any of these coaches going to care about these people in another three months? Come on. I bet you Ryan Seacrest almost never texts Taylor Hicks.

Before we knew it, it was time for Carson to announce the results. Based on iTunes sales, it was pretty clear that Dia and Javier were the top two, and Carson ripped that band-aid off pretty quickly. Thanks for coming, Vicci and Bev! Carson told us that the top two were separated by only 2%, and that Dia and Javier had hit #1 and #2 on iTunes, respectively. I’d say that Carson wouldn’t have said that had Dia been the winner (major spoiler alert and all), but since it was public information I guess he would have announced it no matter what. Anyway, to hell with iTunes because Javier won! Wheeee! Really, though, I was fine almost any result – I think I only would have been disappointed had Beverly won, because her music just isn’t really for me.

So, what did you guys think of the results? Were you happy? Was it too predictable? And what did you think of The Voice overall? Personally, I really enjoyed the show and I’d love to see it extended next season so we can see more performances from the eight finalists. I’d love to see them eliminated one by one, rather than one from each team.