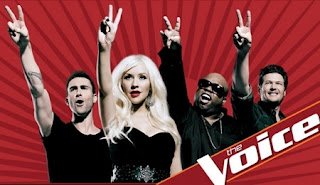 Well, we have our four finalists on The Voice, and they’re the right ones – no thanks to the judges.

Four performers moved on to the finals based on a combination of scores from the judges and the voting public. Thanks to iTunes, previous voting, and cheers from the audience, it’s pretty easy to tell who the fan favorites were. But hey, at least the fans have favorites, since Adam was the only judge to provide scores with distinguishable differences. That’s one of the two major downfalls of this season of The Voice – that the judges haven’t been able to objectively critique the performances. And that’s because they’re coaches, not judges. I love how hands-on and personal the coaches have been throughout the course of the show, but it has also been a detriment. They like these kids too much to give them bad news. 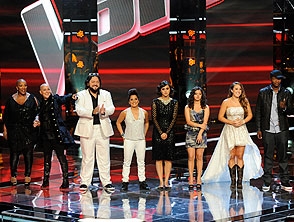 The other downfall? I wish the show ran longer, and maybe next season it will. Because fans voted four of the eight performers into the semi-finals, it was quite easy to tell which singers had the most public support. If they were eliminated one at a time from there on out, it would give singers more of an opportunity to build up a fan base through consistently good performances. Instead, the fan votes this week indicated that not much had changed, and the coaches’ scores did little to influence the results.

Before I talk results, let’s chat about the rest of the show. It was…OK. Very American Idol, what with the sappy conversations, the amusing clips and the group number. Man, did that “Freedom 90/Faith” mash-up ever highlight how out of her league Xenia is, didn’t it? I mean, she just sounded so unsure of herself. It made me a little sad.

First up was Team Cee-Lo. He’d written a short poem in honor of the event…Cee-Lo performed later, and it was very good, so all I’ll say is that he really shouldn’t quit his day job. Or his night job, which is coaching on The Voice. But if writing poetry is his weekend gig, he should really reconsider taking up bowling or something instead. Cee-Lo copped out and gave Nakia 51 points and Vicci 49. I mean, one point isn’t going to influence anything. If he really thought Nakia was better – and I was surprised by that, I love them both but thought Vicci killed it last night – his scores should have reflected that. America spoke, though, and they said Vicci loud and clear. After audience votes had been factored in, Vicci Martinez advanced with a score of 124 to Nakia’s 76. Based on those results, I think she’ll be a major force to be reckoned with in the finale.

Next we had Team Adam, and he was the only one to really split up his points…and even then, it was for kind of wishy-washy reasons. He awarded Javier with 65 points, compared to Casey’s 35. His decision wasn’t based on ability or performances, he said – why would it be? It’s only a reality competition program! It was simply based on the fact that Casey is 18 years old and has a bright future ahead of her (or so Adam insisted) while this may be poor old Javier’s last shot at stardom. I did go back and watch Casey’s performance a second time, and she was quite bleaty. I still like her a lot but, yeah, I get the goat comparison. After audience votes had been factored in, Javier Colon unsurprisingly moved on with a whopping 138 points to Casey’s 62. Now, that looks like Javier has a ton of fan support, and he might – but he also had more points from his coach than Vicci did, so I’m still giving her an edge in the finals.

Then it was Team Blake‘s turn. I thought Dia was a shoe-in here, but both the scores from Blake and the audience surprised me. OK, maybe Blake didn’t surprise me because he’s been a fountain of bad decisions thus far, but he disappointed me when he awarded Dia and Xenia both 50 points. I’m sorry, but there’s just no way that you can argue those girls are on the same level. Dia is miles ahead of Xenia is creativity and stage presence. Her performance was professional, Xenia is still in the league or terrified but talented singer-songwriter performing at her school’s open mic night for the first time. I thought Dia Frampton would soar ahead with the audience vote, but she only walked away with 106 points to Xenia’s 94. Does she have a shot at winning?

Last but not least, we had Team Christina. I was disappointed that she scored both Beverly and Frenchie 50 points, but at least those women are on more even footing than Dia and Xenia. I also thought Christina made a good point in saying it was like comparing apples to oranges. Both her contestants are very talented, but in different ways. I did feel like Christina had the most difficult decision of all the coaches. Beverly McClellan advanced into the final round with a total of 107 points to Frenchie’s 93. Again, this was a close one. Does that mean Beverly won’t have enough fan support to beat out the likes of Vicci or Javier?

At this point, I am decidedly rooting for Vicci Martinez. I like all four contestants, and I wish we’d have four more weeks of performances so they all would have a chance to win me over. I also think it would add more to the competitive spirit among the coaches, to have them place fourth, third, second or first.

Did you watch? Who are you rooting for now?

The Voice: No Surprises
https://haligonia.ca/the-voice-no-surprises-39565/