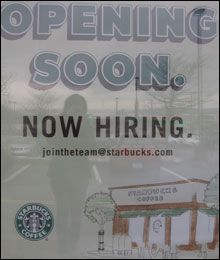 The sign is up for a Starbucks Coffee to open in the old Dairy Queen location, but no set date has yet to be confirmed.

Rumours have been brewing about a Starbucks coffee shop coming to Bedford.

The rumours suggested the shop would soon open in the Village Centre plaza and would be located in the unit formerly occupied by Dairy Queen, which shut down in April.

Yesterday, the sign went up! A Starbucks is coming to Bedford!

The Bedford Beacon headed to the phones with the best intentions, but received few results.

The Bedford Beacon contacted Starbucks’ Canadian head office in Toronto, but was told that they have no information on when the new coffee shop will be open for business.

The Beacon was advised to contact City Officials for permit information.

The Beacon was told that a permit is the only thing that has been applied for. They are still in the early stages as “no inspections have yet been done.”

The Bedford Beacon was then told by the call centre that Starbucks would be the ones to call. Back to square one!

An email to the HRM Corporate Call Centre was promptly answered with this comment: “HRM does not have access to the opening date of a private business in the city. The only aspect of the new Starbucks that HRM would handle would be the building permits for it to exist.”

A call to Larex Properties Inc. confirmed that someone is in fact currently working on the space, but that “there is work to be done.” A target opening date is not yet confirmed.

Keep checking back, as any new developments will be posted on the site.

For now, Bedford residents need to be satisfied with Tim Horton’s and Second Cup, as many eagerly await the grand opening of a new coffee shop in town.

For more information on the Starbucks company, and to download an application form visit www.starbucks.ca.

Things are brewing in Bedford
https://haligonia.ca/things-are-brewing-in-bedford-9662/