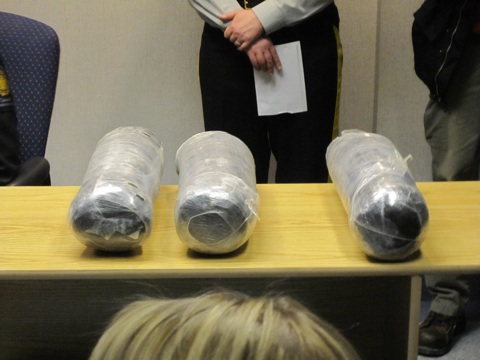 In a joint investigation by the Canada Border Services Agency (CBSA) and the Royal Canadian Mounted Police (RCMP), a significant quantity of drugs were seized in Halifax on Monday, February 8, 2010 with a value of almost $10 million.

Over 200 kilograms of cocaine seized at the Port of Halifax

The drugs were found aboard a vessel that arrived in Halifax on
February 8, 2010 originating from Chile. Through an examination of the
container by CBSA officers and with the help of technology, the cocaine
was discovered in a number of black bags at the back of the container.

“Our CBSA officers are Canada’s first line of defence in seizing
illegal drugs and making sure that those drugs are kept off our
streets,” says Andrew LeFrank, the Director of the Nova Scotia
District for CBSA. “The CBSA remains committed to protecting our
borders and keeping our communities safe.”

Superintendent Brian Brennan, RCMP Federal Policing Officer in Nova
Scotia says, “This success of this seizure represents the seamless
integration between the RCMP and CBSA in identifying contraband coming
through our ports. Our goal is to ultimately disrupt and eliminate the
capacity of organized crime groups to utilize Nova Scotia’s ports as a
stepping stone in a broader drug distribution network.”

Although the drugs were not believed to be destined for distribution
within Nova Scotia, the RCMP is continuing the investigation.