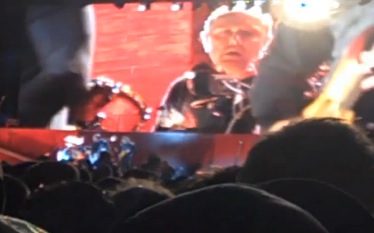 Story by Glenna Brown
Metallica hasn't been to Halifax in 19 years. They've had a pretty intense rollercoaster ride since their formation 30 years ago.
They've seen their fair share of ups, downs, new places, new faces, name-changers, game-changers, rehab, re-vamp, break-ups, make-ups and even a few wake-ups. I'm a huge fan of their older albums, there's no denying it. I am, however, a little more appreciative of their newer stuff since the release of their documentary "Some Kind of Monster" (2004).
It reminds me of a quote i'd read by Misfits member, Jerry Only "If we were to hit the level that Metallica or somebody like that hit, we'd have had a hard time dealing with it. I think it would have been our doom. It's hard for anybody at that level"
It's evident that these guys love their fans and they're not too shy to admit it. I've seen a pretty solid amount of rock concerts and these guys are, by far, the most interactive and playful group that I've seen and I'm ecstatic that they've returned to Halifax.  Now if you'll excuse me, I have to cross "See Metallica" off of my Bucket List.