In the fine tradition of Nancy Drew, Sweet Valley High, and The Babysitters’ Club (to name a few of my old favourites), YA series continue to be very popular. Having stumbled on one enjoyable book, it’s nice to have a follow up or two that features the same familiar, comfortable characters and settings.

With my job with Teen Services, I’ve read a few YA series lately; here’s a sampling of some new series that I have enjoyed (btw, if you’ve never read any of the Sisterhood of the Traveling Pants books, or the Artemis Fowl series, do it now!). 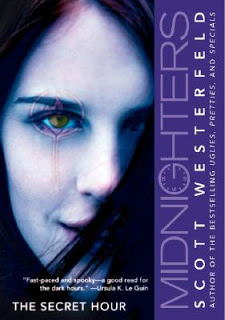 From Scott Westerfeld, comes The Midnighters Series. Over the course of the trilogy, we get to know 5 teens who share something in common: they can live in the secret blue time, a 25th hour that happens every day at the stroke of midnight.

While time stands still for everyone else, they use their individual magic powers, and work together to protect the world from the dark creatures trying to escape from the blue time. The main character, Jess is totally identifiable as she struggles with insecurity and worries about people not liking her, even though she’s clearly awesome and powerful and is the flame-bringer!

Holly Black, author of the Spiderwick Chronicles, also writes faerie books for teens, including the loosely connected “Tithe” and “Ironside”. Both feature confident and strong-willed teen girls, struggling to come to terms with their feelings of powerlessness, and the changes happening in their lives. In the infinitely better “Ironside”, Kaye discovers that she is chosen to be the new Queen of the faerie world, but she intends to figure out a way to fulfill her destiny on her terms. Lots of intrigue, some romance, girl power, and the opportunity to get lost in a really imaginative fantasy world.

A popular adult author, Kelley Armstrong has jumped on the YA bandwagon with her brand new Darkest Powers Trilogy. The Summoning came out last year, and its follow up, The Awakening is a 2009 title. In the first, Chloe is given a diagnosis of schizophrenia and sent to a group home with other ‘troubled’ teens. In reality, Chloe can see and communicate with ghosts, and her fellow home-mates have equally impressive and scary abilities. Is it a coincidence that they’ve all ended up together? Who’s in charge of the group home? Just what kind of danger are they in?! I’m anxiously waiting for my hold on the second book to come in so I can find out!

Not in the mood for a “genre” series? Try The Clique series by Lisi Harrison. It’s a tween version of Gossip Girl, complete with girl rivalry, popularity politics, and extreme shopping. A great pick for fans of the movie “Clueless”.